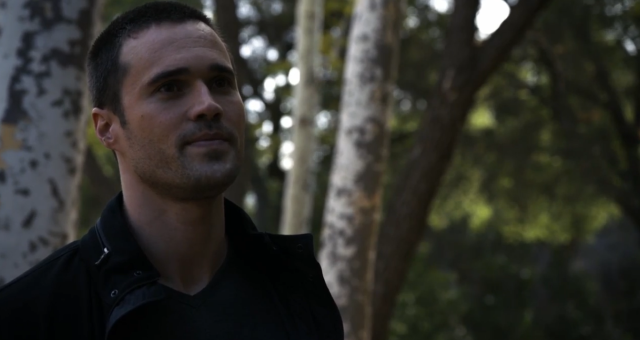 Agents of S.H.I.E.L.D.: The Things We Bury is the 8th episode of the season and shows how the past of others and decisions made come back to shape crucial events today. It opens up in 1945 in Austria with Daniel Whitehall conducting experiments with what is now known as the Obelisk. He has soldiers bring various people from the surrounding areas and monitors the results of people being forced to touch it, which usually results in death. He’s trying to figure out how the obelisk decides who lives and dies when touching it, and he doesn’t care how many are lost as a result. However, when one woman is forced to touch it, the deadly effects of the obelisk are reversed and she shows no signs of visible harm. These experiments come to an end when news reaches him that the Red Skull was defeated and his remaining forces, including Whitehall, would soon fall, with him being captured by Peggy Carter. This past is what Whitehall references when he states to Skye’s father that he’s not impressed with what he has revealed so far about the Obelisk because he already knew these things, and he threatens him. However Skye’s father tells Whitehall that the Obelisk is actually connected to a special place, and if taken there will do amazing things besides kill. This is the same city that Coulson and S.H.I.E.L.D. are searching for but have yet to locate. And they have their hands full considering former Agent Ward is still on the run. So can they find this magical city before Skye’s father leads Hydra there or is there more going on they may not know?

I’ve been really excited about this story line with the alien markings and the Obelisk because there have been some tremendous revelations connected to it. And I’ve been fully confident that this same level of excitement will remain throughout because of the way the stories and characters have been handled this season. And the start of this episode would be great as no time was wasted in showing more about the Obelisk, and raising the question of how could Whitehall, who had a different name in 1945, could look exactly the same after all these decades. And the fact that Skye’s father would reveal there’s a city connected to the Obelisk intensified the search for it as it would be a race between Hydra and S.H.I.E.L.D. with only one person truly knowing what was in it. But S.H.I.E.L.D. would gain some insight into Hydra’s operations while Bobbi Morse was interrogating Bakshi, in an entertaining fashion, when she would get him to slip up and reveal that somehow Whitehall and the Red Skull had some kind of connection, and not just an ideological one. This would lead the team to look at old files and discover that not only did Agent Carter interrogate Whitehall herself but that somehow he hasn’t aged. So this would create an interesting mystery about Whitehall while allowing for some very relevant flashbacks connected to his time after being captured and the early workings of S.H.I.E.L.D.. And once again, the loyalty of Hydra agents would be on full display.

It wouldn’t be all about Whitehall as Grant ward would come face to face with his brother, and if there has ever been a change in a character for the better, and handled in a tremendous way, it has been Grant Ward. Even though he hasn’t been directly involved in these story lines aside from his interactions with Skye and delivering Bakshi, his story line has been highly enjoyable as well this season. Grant would kidnap his brother and take him to the area they grew up in order to confront him about the story he told last season about an incident at the well. He would maintain that it was actually Christian who forced him to watch and be involved in their brother’s drowning. And Christian would state that it was Grant still lying to himself about what happened, and refusing to take responsibility just like everything that has happened with Hydra and S.H.I.E.L.D.. Grant is unmoved by this and forces Christian to dig up the well that was covered so long ago, tying this storyline into the episodes name. These were excellent sequences and so intense at one point I said aloud that Grant Ward was crazy and relishing in this newfound position of power over his brother. But there were also a few surprises along the way and I just love how his story has been treated this season. It’s another enjoyable storyline in the midst of the others.

And it’s this development of characters combined with the story progression that has made this season, and this episode, so exhilarating to me. Coulson would talk earlier in the episode about why Bobbi was interrogating Bakshi instead of him, and he would reference Nick Fury and how he was always 5 steps ahead. So he would state that he was focusing on his new role being good director and trying to analyze the bigger picture. And this episode handles the details very well but also nails the bigger picture by connecting all the events shown from 1945 to everything currently taking place. So there would be plenty of action along the way, and for all the mysteries this episode would introduce, it would give even more satisfying answers while building up anticipation about this mysterious city. At one point during the first season I wondered when Agents of S.H.I.E.L.D. would fully embrace the greater Marvel universe, and not only has it done that this season but is now digging deep, uncovering serious gems along the way to this city. And I can’t wait to see the destination.

Agents of S.H.I.E.L.D.: The Things We Bury is another excellent episode that does everything to increase the excitement about this mysterious city while beautifully connecting past and present events. Whitehall’s stature is raised as its discovered that his twisted experiments did pay off directly for him, and it would be tied into the current situation in a shocking way. And Skye’s father also impressed me more this time around as he’s not as simplistic as he originally appeared. And with the race on to discover the city first, answers will soon be revealed. And I don’t know how Grant Ward’s story will ultimately tie into these events, but his current story is just another example of how enjoyable and unpredictable these story lines have been this season. Agents of S.H.I.E.L.D. is definitely on a roll.