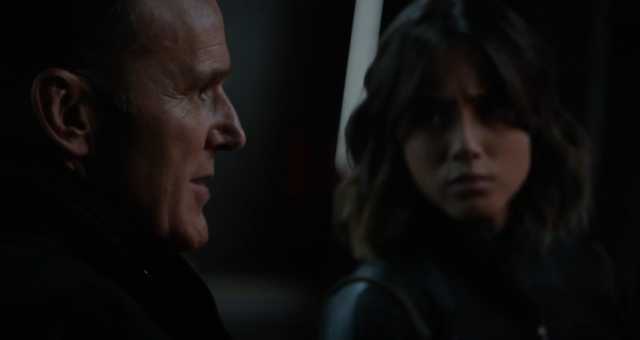 Agents of S.H.I.E.L.D.: Laws of Nature is the premiere episode of season 3 and has S.H.I.E.L.D. competing against a mysterious organization to track down more Inhumans. Joey Gutierrez running around the city dazed about his sudden ability to melt metal objects leaving a trail of destruction in his wake. Things go from bad to worse when he’s suddenly surrounded by an elite force ready to apprehend him when he accidentally melts their weapons. This gives him enough time to flee but they eventually find him. Suddenly his fortune changes when Daisy, Lance and Mack arrive taking out the elite force surrounding him. They promise to help him and calm him down long enough for him to be extracted to safety aboard S.H.I.E.L.D.’s new command jet, the Zephyr One. A lady arrives on the scene with the leader of the mysterious elite force following her commands. Meanwhile, Daisy, formerly known as Skye, attempts to explain the situation to Joey and how he’s undergone a metamorphosis due to the Terrigen being released into the water supply. She knows what he’s going through but unlike her he was loving his current life and has a hard time accepting that he can’t ever return to it because he’s now viewed as a terrorist with dangerous powers. Joey isn’t the only one who has gone through changes as much has changed with S.H.I.E.L.D. since the battle with the Inhumans including the disappearance of Gemma and Hydra on the run. But now there seems to be new threats and not just the black ops organization hunting Inhumans but the sheer number of people discovering they have new powers. Can Coulson lead the organization effectively during this new era in its existence?

There’s a funny moment this episode where Coulson remarks that it’s hard to get used to the name Daisy as opposed to Skye and the other characters say no it’s not. To me that name change, and the drastic character change, is indicative of how this show has transformed from a team of straight-laced agents with references to the Marvel universe to an exciting, and oftentimes shocking, television show that is leading the charge for introducing the fascinating Inhumans to the Marvel Universe. So if you haven’t been watching this series consistently then your surprise about Skye’s name change to Daisy will only be surpassed by your surprise about how much this show has changed for the better. The opening sequence with Daisy aka Quake walking in with Mack and Lance was a great start to this episode and the season. It was pretty cool seeing Joey melting the metal all around him and not understanding what was happening around him or why this was possible. The complexity of this situation ranging from the sheer destruction with consequences captured by cameras everywhere plus the audience’s, I mean Joey’s quick explanation showed clearly how everything wasn’t simply black and white anymore. Even the mysterious black ops squad and their leader, Rosalind Price, weren’t just simply an evil organization opposing S.H.I.E.L.D. as the initial belief was S.H.I.E.L.D. could be behind the slaughter of Inhumans.

I really appreciated the way the stories unfolded with the numerous threads and characters instead of everyone just focusing on one event of the week. The sheer number of characters in this show makes it almost impossible for them all to have multiple story lines stuffed into one episode so it was great to see how that was managed with some characters not making an appearance this episode. Although that meant Agent May didn’t have an appearance but I have no concerns about her story lacking this season.

And that’s because the “character juggle” was much better so not one character felt redundant. Coulson and Lance mainly focused on finding Rosalind and her black ops team, and there was even time for a Lance and Bobbi Morse side story. Daisy and Mack worked with Joey early on but they went to search for Lincoln, the Inhuman who helped Daisy understand her powers, and they met a fearsome foe in Lash, a mysterious creature targeting Inhumans. And this was a very intense battle, and I loved it.

The biggest change was to Fitz’s character in his search for Simmons, and he actually had solo scenes where he was dodging bullets and fighting local criminals halfway across the world. One thing that was always undeniable was his love for Simmons. And I have to say that Iain De Caestecker put in a riveting performance. And as one who was harsh on the character early last season it’s a big turn around and is an engrossing story thread, which includes Simmons location. And from that tidbit at the end of this episode I can tell this season will exceed the previous two. Can’t wait to see.

Agents of S.H.I.E.L.D.: Laws of Nature is an excellent episode declaring that Agents of S.H.I.E.L.D. is back and better than ever. Right from the start the Inhumans story line takes center stage, and the intensity and complexity of that encounter is indicative of how far the writing and overall story has come since the show’s inception. The character development is better than ever, and the new villains are way more than just the enemy of the week variety but part of a greater story.  I was looking forward to Agents of S.H.I.E.L.D. being back and it was definitely worth the wait. In its third season I believe this show has finally discovered its potential.