As a fan of really good action movies I’m always looking for something new to enjoy, and when I heard about Raze it definitely piqued my interest. The premise was ripe for action and with it starring the lovely Zoe Bell, who has done incredible stunt work throughout her career, I knew the action would be great. The premise of Raze is 50 women are abducted, imprisoned, and forced to fight to the death  against their wills or else their loved ones will die. The organization behind this is a secret society that has a deep history and if there’s one thing that is clear to the abductees is that this organization is as serious as achieving its objective with these fights for entertainment as it is for carrying out its threats. After watching the movie not only did I enjoy it but the depth given to some of the characters, mainly Sabrina (played by Zoe), was surprising and in a very good way. The transition from a stuntwoman, to playing herself in roles, to now being a lead actor is complete and she did in excellent job in the lead role. I won’t be posting a review of the movie until it’s released in January 2014 but I couldn’t pass up the opportunity to interview Zoe Bell and director Josh Waller at NYCC to get more insight into the movie and the characters. (Of course all spoilers have been removed.)

Me: In some of the scenes you play up the humanity of the women as much as the action sequences, and part of this was done through the use of TVs in all of the cells as well as them being able to talk to each other through the walls. Did the secret society want part of the entertainment to be the psychological struggle when certain fighters face each other or was it so they could observe and learn how to fight better?

Josh: It’s a form of torture and it’s also because that’s how they can prove (that they’re going to kill a loved one.) So they could just be empty words. So if you see one of the other initiates who are unable to fight or refuses to fight and the screen changes to that person’s relative and you see them get murdered on all the screens in all the cells, the other girls are gonna think twice.

Zoe: Like Sabrina watching — get killed. The whole point is (they) want to see these women fight and they believe that they’re doing it for the good and the strength of women. So they love seeing Sabrina get to that place (of extreme anger). They’re not sick and twisted in their (own) eyes. They don’t see it as “oh we’re abducting women and we’re torturing them to death.” They see it as this is going to empower women and we’re gonna do it one woman at a time. Out of these 50 women 1 will survive and she will be changed. She will see what her true power is…women are capable of much more than men are and we’re gonna show you. 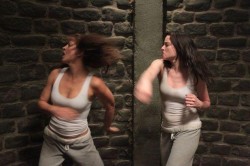 Me: I noticed in the beginning of the movie, the very first fight, you pretty much deceived your opponent, Jamie, to get her into the room and then you just started fighting her. And then later on you inform another fighter about everything that you knew was taking place. Do you feel that was part of her growth?

Zoe: The deceiving of Jamie is I think is sort of the realization that this is what she has to do. Can’t talk Jamie into something like “yo we’re gonna fight to the death so you wanna come?” I could try I guess. But getting her in there was part of the process of knowing this is what she’s gonna have to do. (There’s a) point where as far as she knows her kid is gonna get killed any way…and she’s just like bring it. I don’t give a fuck. There’s a plan that’s starting to form and it’s like the only reason I’m planning this is for revenge now. I’m not doing this for the good of my daughter, I’m not doing it for anything good. I’m like if you go against me and actually kill me bring it. I would welcome a little peace. Having said that, if I can get you on board I would take every one of these motherfuckers down because that’s how I’m gonna go out. That is definitely part of her journey.

In regards to her journey from stunt woman to acting and the role Quentin Tarantino played in that, Zoe not only elaborated on that and wanting to now focus on acting but Josh elaborated on selecting Zoe and why he felt she was perfect for this role.

Zoe: I did acting in school. I could make people laugh, which ironically this movie doesn’t do at all. People would always say to me “do you want to get into acting?” and I was like no, I’m all about jumping off buildings and shit. That’s my stuff. And then Quentin (Tarantino) wrote me into Death Proof, and I was like “oh I can do 60 pages of dialogue. No problem. No idea how to do that.” And from there it sorta felt like a natural progression and it’s been difficult for me. I’m not gonna lie. The art of acting…I go to class, I do whatever I can because I have to practice. And the biggest thing for me is getting comfortable with it. Being relaxed, showing emotions, and having a camera in my face as opposed to behind me. I think also Double Dare was around at that point and he loved the documentary. And people loved me as a character and he was like “I’m gonna make her a character in my movie.” And the conversation we would have on Kill Bill was very much him. It was the first time that anyone had directed me as a stuntperson the same way he was directing all the other actors. He was like what’s your motive, and I was like “pfft, paycheck.” No, no seriously what’s your motivation? I was like oh sorry, my bad, to kill these guys. And he says yeah but why do you kill those guys. And I’m like to get to the staircase. And he’s like why do you need to get up the staircase. I’m like, to kill those guys? And he’s like why? And I’m like because they killed my unborn child and stole my life. And he’s like yes, and I like “oh, hand me my sword.” But I think just that relationship struck something for him. You have to ask him (Quentin Tarantino). 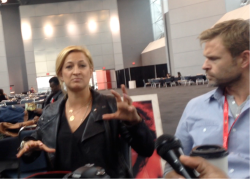 Josh: The reason why I always gravitated towards Zoe (goes back to) when we met each other through Death Proof. I was like “my God, that girl,” and then we actually became friends. But I would like to see her transition out of the stunt world and become solely as a leading woman and supporting leads. And there’s no reason why it shouldn’t happen. So this was part of the reason why we brought Zoe in. She obviously has all the action and can do all the stunts. But with Raze it was like let’s really tap into what we can get out of her. And I think what fed us as lead actor and director was it made for a really comfortable work environment because we knew each other very well. She felt a little more at ease to go there emotionally and…because I know (her) so well that if I didn’t feel like it was real and it was not quite there I could be like, “nah I’m not feeling that or you’re faking it.” I could call it out. And what ultimately came out to me was the most raw emotional performance I’ve ever seen from (Zoe). So it taps into all the action that we’ve seen her do before but the visceral essence of all the action, you really get how it affects you psychologically.

Me: How did you draw on that emotion? Did you reflect on your own personal experience because some of the scenes were intense. How did you relate to your character?

Zoe: A huge part of it for me was to create the character at the beginning. I went into depth about her story and I would talk to Josh about it. And even when we did the first piece, the short before the feature-length script was really in place, I’d already established a very strong sense of who Sabrina was and where she came from. And the irony is I have an incredibly close relationship with my mom and I don’t have children. Sabrina doesn’t know her dad and her mom is an alcoholic fuck up, and she gave up her kid for adoption. But for me I know enough people in my life that when I created Sabrina’s mom, I knew her. I know that woman and I know how people in my life have been affected by that relationship. So when I wrote something that I could feel, I made it part of Sabrina’s life.

Josh:  Her preparation was crazy. When she showed her back story. … I didn’t want to intervene too much because every actor has their own process and that’s none of my fucking business. The only time it becomes my business is if they’re creating some kind of back story that is working against the actual script. So she would be like what do you think of this and it was pages of back story.

There’s more I wish I could write about this movie and this interview but you’ll have to wait until it’s released. I will say that if you’re a fan of action movies then you definitely need to check this one out and the beautiful Zoe did an excellent job in the lead role. She may be accustomed to the camera always being behind her but I think this is the start of it being in front of her because she has what it takes.