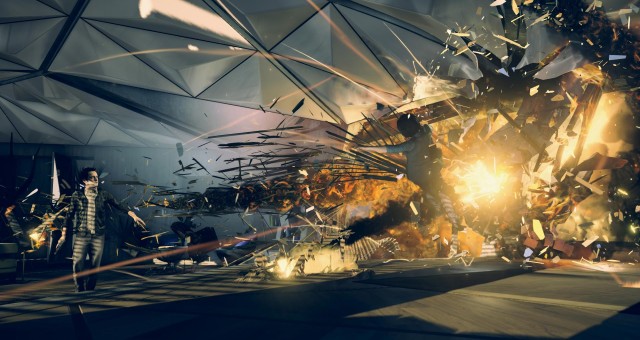 Quantum Break is an action game combining live-action video with game play and is being developed by Remedy Games exclusively for the Xbox One. The way the story will unfold is a very interesting concept and I’m definitely intrigued by it. A live action season will accompany the game and the way the episodes will play out will be dependent on the choices you make in the game. It’s the modern-day version of the Choose Your Own Adventure books. This game has more than just an interesting concept because the story in it supports it completely with its time manipulation aspects. It starts off with a time travel experiment gone wrong at the North Eastern U.S. Riverport University and as a result the 3 present end up with the ability to manipulate time. The premise is that since time started to break down while they were present, their exposure to that event granted them different abilities related to time. And out of the 3 characters, one of them, Paul Serene, can see into the future and decide which present choice to make yet becomes the villain in this game. Yes you can play as any of the 3 characters in this game: Paul Serene, Jack Joyce and Beth Wilder. It seems as if this will be contextual and not a completely free choice but that won’t necessarily hinder game play.

If you haven’t seen the trailer yet you can watch it here. Even though there isn’t much in the way of game play showed it’s a 3rd person action game. And since it’s from the original creators of Max Payne and Alan Wake I would assume with the time-bending elements in the story line some action sequences might be in a similar vein as Max Payne. The story is definitely one that caught my attention and the time-manipulation aspect could lead to some incredible game play moments so I’m certain that Quantum Break will be one of the Xbox One exclusive titles I will enjoy. The live-action portion of the game can be revolutionary depending on how it’s implemented and the production value of it but I like the break from what has been the norm even though this isn’t the first game to use live-action sequences. I would like to see more game play to get a better grasp on how it will be but there’s currently no official launch date so that’s not a surprise at this point. However, it’s already on my list of games to keep a close eye on.