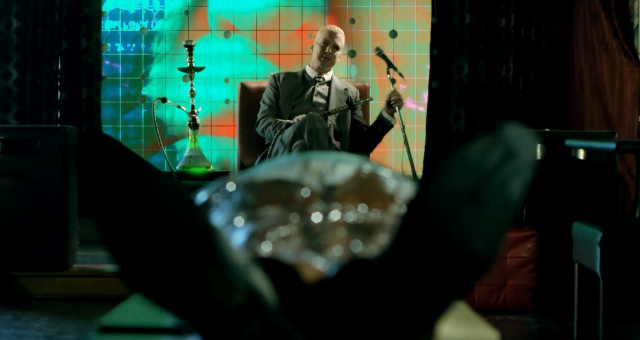 One of the things I love about sci-fi movies is how they can be in a unique position to address the human condition either through the use of technology from a morality standpoint or to inspire dreams about endless possibilities that could one day become a reality. Cyberpunk goes even further with the former and there have been some true classics that raised questions about how poorly we can treat each other and technology’s potential to exacerbate that reality. Apocalypse Kiss is a sci-fi movie that definitely attempts to address the fundamental elements of the cyberpunk genre with its eccentric characters and the looming destruction of the entire planet. It features a detective trying to solve the murders of the serial killer known as the Red Harvest Killer, who relishes in the attention the media gives to him. But when the murders of two nomadic killers, Katia and Gladys, are mistaken for the Red Harvest Killer’s work, he’s offended by that and begins a game of cat and mouse with the detective in order to reclaim his reputation. After watching I was able to interview Christian Grillo, the director, to shed some light on the events and characters in Apocalypse Kiss.

Me: There are a few key storylines going on in Apocalypse Kiss. There’s the Harvest killer, the two women going around killing people and the impending apocalypse. It’s like the world is going to hell in a handbasket. So what is the message you wanted to convey the most with this movie?

Christian: In all honesty, it was just strictly a movie I made for entertainment value.  I was really just trying to make a fun popcorn movie, and I wasn’t trying to strike a lot of deep thought into it other than possibly the fact of where our government is heading, and we as people are heading since we’re so self-consumed with our status to the world as Adrian the Harvest Killer is. We constantly check our Facebook pages, see who likes our stuff, and we all sort of seem to want to have this verified self-worth from other people. And I think that’s a lot of what I wrote in Adrian’s character. Other than that and our big brother government that we have out there, I was just hoping people would find it entertaining.

Me: There are strong cyberpunk elements but not as heavy on the technological aspect. What stories, if any, did you draw on from that genre when crafting the story in Apocalypse Kiss?

Me: Early in the movie Adrian helped a homeless man who was having a health issue. And when the man says to him that there aren’t many good men like you in the world anymore, Adrian says it’s because he doesn’t like to see trash on the ground, which I took to be condescending. But when he’s talking on the phone to his mother later he gets offended that she doesn’t want him living in that area because of poor people. So why was there such a sudden change?

Christian: Have you ever found yourself contradicting yourself to people in your life? Well there you go. We all do it, don’t we? In a certain person’s eyes, maybe your parents, you want to act like you’re a moral Christian person and in front of another person you show your true self. And I think that’s something that lives inside of all of us.

Me: After the discussion with his mother is the first time we see him getting upset with the news coverage of the murders being attributed to him. He was offended by that. So what type of relationship did he have with his mother because it seemed like he wanted the same attention from the media that he was receiving from his mother?

Christian: Adrian is a very complex character in the story but he’s mad at the media because it’s not about him. He does all this hard work to constantly stay in the limelight of the news and then these 2 girls who couldn’t care less come in and they sort of pull the carpet right from under him. But he doesn’t want it from his mother, he wants it from the world like most of us.

Me: I found it ironic that he was OCD in everything that he did but the problem he started having with Gladys and Katia was caused by him because when he detected them early in the movie he just let them go. Was there a message in him letting them in or was it something that he didn’t think was important at the time?

Christian: I think it’s a little bit of both. I think he took notice of it because he saw that there were 2 girls who didn’t come up in the system. But if we were to explore the movie in a prequel or something I could show those things a little bit more that maybe Adrian when he works for Horn industries that’s an occurrence that happens everyday. Anybody who does something everyday and it’s their job (there are occasions when) they tend to not overreact to them. So I wanted it to still feel like a job but he just happened to take notice a little bit more than if it was another occurrence. But not enough to take it so serious that he would start tying everything together right away.

Me: Gladys and Katia had a complex relationship, and that was pretty much the theme for everyone’s relationship, but we were given a little bit of backstory about Gladys in terms of being spoiled by her parents. Was more of a parallel being drawn between Adrian and Katia or Adrian and Gladys?

Christian: It would be Adrian and Gladys because with Adrian his mother lives in the west factor, which is the well-to-do area like you’ve seen in many sci-fi films. The separation of classes is a constant scene in sci-fi films. Gladys was obviously also from the west factor so there was definitely a parallel between the two.

Me: Detective Jerry Hipple was the only one who noticed the killings weren’t done by the same person even though the media already attributed all the killings to the Harvest Killer. The society at large wasn’t shown so the impact of the media wasn’t explored but what was it that made the media decide to report that falsehood?

Christian: I think the media does that everyday today because they always just assume. You have people walking around right now saying 9/11 was caused by our government. Now I’m not an advocate of that and I’m not saying it’s true or not true but the media will spin a tale of whatever they want the people to believe right away because they just want a story. They don’t always care what the story is as long as they can keep viewers watching.

Me: The detective had regular hallucinations, and he told his wife that he only hallucinates about her when he’s at his worse. But to me it seemed that’s what kept him grounded while the other characters only got progressively worse. How was it possible that the detective was able to avoid the pitfalls of fame unlike the others?

Christian: Well, there are two underlying stories in the entire film. The real true part of Apocalypse Kiss is broken down between two love stories. Katia represents someone who can’t accept love in their life. They’re uncomfortable with it and don’t know how to love or be loved. Where as Detective Hipple losing his wife, and especially when he finds out that it’s possibly because of his work, Hipple would represent someone who was loved, lost it and didn’t appreciate it. So there are two parallel universes of love that’s portrayed in the film. And that’s the real story of Apocalypse Kiss. So to answer your question, the hallucination…now works as his conscious helping him understand the kind of person that he has become and the kind of person that he is without her.

Me: If there was a prequel for Apocalypse Kiss what would you want to focus on the most?

Christian: If I ever were to do a prequel it would be about the rise of Horn Industries. So you would see Michael Berryman (who played David Horn) in it a lot more and how he came into power. There was supposed to be a lot more of him in the film but because of time constraints and I was trying to keep the story flowing I left a lot of the backstory out. I felt like I was just shoehorning it in if I kept pushing it in there. But I would like to show the rise of Horn Industries and the previous 10 years as to how we went from being in the world where we are now to being in that world. Apocalypse Kiss is supposed to take place in 2052. I would love to show that progression, where Katia comes from, where David Horn comes from and how Adrian becomes the person he is.

Me: Do you have any other upcoming films?

Christian: Right now we’re working on a series of 3 children horror films called the Sugar Skull Girls and you can see that trailer online on my YouTube page, Mr. Potent