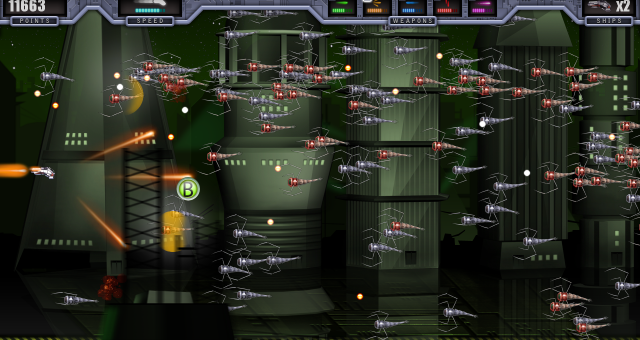 I decided that this week I would focus more on Indie games with my posts and reviews because Indie games do hold a special place in my heart. And not all Indie games are the same. I thoroughly enjoy the big name franchises as well as new IPs but as one who’s been a gamer my entire life Indie games can remind me of a time when the focus was having fun and it was simple. The gameplay wasn’t necessarily simple because some of the games back then were less forgiving than games today but the focus on having a good time was simple. (And what is there not to admire about individuals who take a chance to pursue their dreams through dedication and hard work in order to succeed.) And in my search I came across a game I’m very excited about and looking forward to its release and that’s Power Up!

Power Up! is a retro space shoot ’em up developed by Mike Hanson set to be released this summer on Xbox Live and in the Fall for PC. The premise in this game is you’re the last human alive after the Earth is attacked and humanity is destroyed by a brutal army of reptilian invaders. You was able to escape in a shuttle and after realizing you’re all that’s left of humanity you decide to seek revenge against those responsible and you have at your disposal a prototype fighter dubbed Weapon F to help you succeed. So you’ll have to fight through waves of reptilian forces over five chapters to avenge humanity. So the true star of this game is the Weapon F. However you’re not completely alone. You’ll have the help of HATI, your on board AI, and you’ll come across a cast of characters with some trying to aid you and some trying to stop you. And you’ll need all the help you can get because you’ll eventually have to journey deep into the core of the reptilian home planet and it won’t be easy to get there.
It’s reminiscent of classic space shooters like Galaga or Raiden but the graphics look great and the models are all 3D models. That’s not the only way this game is an upgrade over those classics. There will be weapon select and power up systems so you can upgrade your weapons throughout the course of the game in addition to the standard temporary power ups. So depending on how you like to play the game you can customize and strengthen the weapons you prefer to use. Big on reliability and you’re a good shot? Use and upgrade the straight laser. Not so good at avoiding fire and you find yourself facing too many enemies at once and not so sure about your aim? Upgrade the Spread Shot. That’s not all. You also have a side shot, a plasma cannon and also a rear gun because after all you are the last human so you have to watch your own back. And there will be some control innovations as well with one being called the “Parthian-shot death control” and it does exactly what it sounds like. You’re on a mission of revenge so instead of watching helplessly while your ship is dying you can mete out some payback.

This is Mike Hanson’s first Indie game to be released on Xbox Live but has worked in the industry for years coding and designing before starting Psychotic Psoftware. There’s a kickstarter for this project so check it out for more information. I’m definitely looking forward to this game and will be getting it once it’s released on Xbox Live. Mike says that part of his motivation in doing this is that “there seems to be a lot of people who get where I’m coming from with my games and where I’m trying to take them.” And after getting a preview of this game I’m one of them. Check out the concept art for some of the bosses to whet your appetite even more 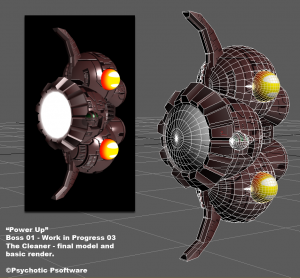