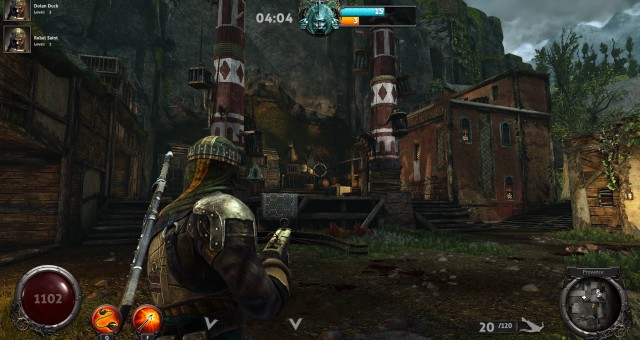 Nosgoth is a free-to-play multiplayer game that pits a team of humans against a team of vampires in its centuries old war between the two. It’s set in the same fictional land as the Legacy of Kain series, and even though there’s no requirement to have knowledge of those games, you might recognize a few things here if you do. This past weekend the beta was available on Steam so I downloaded it to give it a try and I was impressed with it. And now I’m applying to be part of the closed beta so I can play more. The multiplayer requires you to play alternating rounds as humans and vampires so you’ll have to become acquainted with the skills of both, and they are different. The humans, of course, use various weapons to kill vampires, and the vampires use various abilities to kill humans and they move differently. There are 4 classes of humans and vampires:

There is a separate tutorial you can choose in order to become acquainted with the different skills of the classes and learn the controls. You won’t be able to practice during the tutorial to hone your skills but there is a separate matchmaking feature for levels 1-10 so you won’t have to worry about being obliterated every time you play. There was an issue with that this weekend, and during my first match I thought the vampires were horribly overpowered until I realized it was my team of level 1’s against a team of level 11’s and above. Once that match was settled the game was much more enjoyable with a relatively balanced match, and in any multiplayer game team strategy can make a world of difference. In addition to the regular melee and ranged attacks each class has a number of abilities you can use with a cooldown period based on the level. This helps keep the classes relatively balanced so if you’re a Reaver, for example, you can’t pounce from one target right to the next without a delay, and if you’re a hunter you can’t use your devastating explosive attack without thinking about whether the shot is worth it. And you can’t kill enemies with one or two hits (unless you’re at a much higher level) so it’s not just a matter of seeing an enemy first but attacking wisely. This makes Nosgoth feel much different from many multiplayer games out there. It was a lot of fun scaling a wall to scout the area as a Reaver and then pouncing on an unsuspecting enemy to get an advantage in a fight, and then scrambling up another wall to make an escape. Dodging attacks as both humans and vampires is a huge but enjoyable part of the gameplay.

The graphics were decent at the highest setting, and the maps were very well-designed for all classes as well as being visually appealing. However the graphics weren’t mind-blowing either. I was curious about this game when I first heard about it, and after experiencing the beta it has definitely shot up my list of games to keep my eyes on this year. Check out the trailer below.