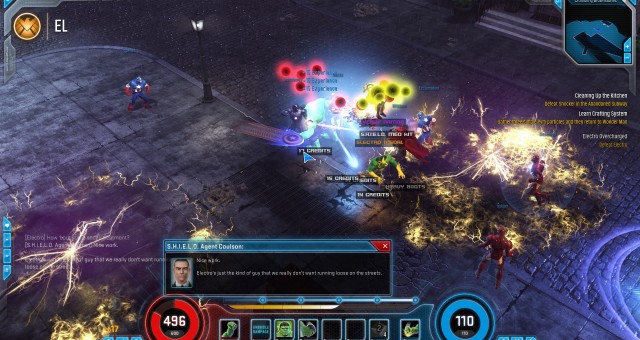 Marvel Heroes is a MMO/ARPG featuring all of Marvel’s greatest heroes as they seek to stop Doctor Doom’s plot to rule the world using the Cosmic Cube. You can select your favorite character (or unlock new characters) and guide them through an original story and customize them from their abilities to the costumes they wear. It’ll be free-to-play when it launches but there was a free beta available this past weekend and I was able to try it out for a while. I didn’t get to use every single character available and of course this was beta play so my experience might have been different from someone else’s and different from the final product. However with less than a month to go I don’t think there will be any ground breaking changes. So my first impression of it is it’s a lesser Ultimate Alliance. That’s not necessarily a bad thing considering I enjoyed the 2 Ultimate Alliance games so it’s just what it resembled to me.

The beta allowed me to choose one of the Avengers from the movie of course (went with the Hulk first) and the starting point was at Avengers HQ. There was no origin story or character specific mission to start and I’m not sure if this is just for the beta or for the full game. This is the home base where you can keep additional items that can’t be stored in your inventory, buy/sell items and receive healing after completed missions. After completing some missions and leveling up I was able to access additional parts of the HQ and as a result get access to things such as crafting and customization. The crafting was fairly simple and consisted of having to collect different elements during missions and use recipes from Dr. Pym aka Ant-man to construct new items. The customization varied from different costumes or abilities. So for example, it was possible to turn the Hulk into World War Hulk appearance wise.

Of course one of the main draws would be the action and it’s very similar to other MMO/ARPGs in the sense that as you level up you can acquire more active and passive abilities and assign them to keys for quick use. And each ability can be leveled up further to increase the strength of an attack or the duration and effect of a passive ability. Some abilities can’t be unlocked until you reach a certain level. The combat early on was decent considering there were only two attacks but it became more interesting as I leveled up and had at my disposal more attacks. I know it wouldn’t be much of a battle if heroes defeated enemies with one blow but even though it was entertaining it did seem odd to see regular guys taking punches and ground smashes from the Hulk when the enemies got tougher in later missions. The first mission went smoothly although it does take time to get used to seeing numerous Iron Man, Captain America, Thor and Hulk characters running on the screen at the same time. This also resulted in one of the battles with Electro being a huge jumble. Defeated enemies dropped plenty of loot and not everything that dropped could be used with every character. Considering how much loot dropped this wasn’t a problem because if anything it could always be sold at one of the vendors at HQ in order to purchase a better item.

Marvel Heroes was entertaining and I expect it to be a bit more polished once it’s released. I will keep my eye on it since it’s free-to-play and I will try it again however I didn’t see anything that would make this game leapfrog ahead of current games I’m playing. It definitely has potential. It’s set to be released on June 4th for the PC.