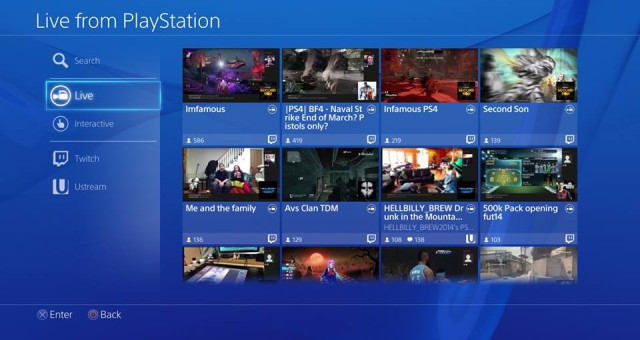 Live From Playstation is the social hub that allows you to view and interact with other gamers on the Playstation Network. And you can broadcast your gameplay, or yourself if you have the Playstation 4 camera. This is done through either Twitch or Ustream and you’ll need to set up a separate account for each when prompted, if you don’t have one already. You can view other broadcasts even without an account but you won’t be able to interact with or comment on the broadcast of others. It’s very easy to broadcast your game play and it’s literally with the push of the Share button after starting a game and you’re given the option to either Upload Video Clip, Upload Screenshot or Broadcast Gameplay. When you select Broadcast Gameplay you can either broadcast on Twitch or Ustream. And others can view and comment on your gameplay but the interact feature isn’t fully operational yet.

If you want to take a break from playing a game and watch others play or just check out a game you don’t have then you can just go to Live From Playstation directly from the dashboard. You can sort by either Live, Interactive, Twitch or Ustream feeds. What is being shown is completely up to the user when you’re viewing a Ustream feed and even though there are terms and agreements for use just be prepared to see almost anything if you don’t know the people you’re viewing.

Overall this is a pretty cool feature and I’ve found myself just watching different feeds of both games and just people to get an idea of what’s out there. Most recently I was able to watch a feed of Metal Gear Solid V, which is being released this week, and it looks really good. This is one of the benefits of Live From Playstation but I am looking forward to the interactive features working and how that will impact one’s gaming experience. Until then, it’s enjoyable even if limited to just viewing.