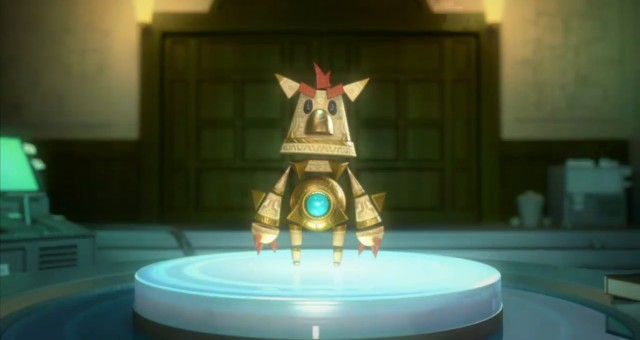 Knack is an action platformer developed by Japan Studios and exclusively for the PlayStation 4. It stars a character of the same name who was created to be mankind’s greatest hope against a race of Goblins waging war on mankind. Even though Knack is less than 4 feet tall he’s actually a collection of relics given consciousness and as a result can integrate other relics into his frame to transform himself into a giant or some other useful form. And it will be necessary because the Goblins are led by Gundahar and they won’t stop until they completely crush mankind. But with power comes other problems as the potential power of all the relics ultimately leads to conflict among those wanting to possess it.

When I first saw the trailer and description for Knack I was very intrigued and with the designer of Ratchet and Clank, Mark Cerny, on board I figured this would be a fun game to play. After seeing even more game play it’s become one of the games I’m looking forward to on the PlayStation 4. The story itself seems simple enough but has the potential for a fun, interesting story line while posing questions dealing with power and responsibility. But the game play mechanics look even more interesting and the changes to Knack throughout can keep it enjoyable from beginning to end. An important part of game play is understanding when and how to use Knack’s different abilities to not only defeat the over 100 different enemy types in the game but how to advance in the game and get past different situations.

There’s a simple melee attack, a power bonus move, dodge, jump and of course combos to give some depth to the gameplay. Knack can grown from anywhere between 3 feet tall to 30 feet tall . Some situations it’s advantageous for Knack to be 3 ft tall because he can transform from normal mode to stealth mode, which allows him to walk right through lasers as shown in the extended game play. The catch is you can’t fight when in that mode so you’ll have to absorb more power to grow in size to engage enemies. So the environment will play a role in the game play as well because the different items in these environments that are absorbed lead to Knack growing faster. Also one environment can render everything that was absorbed in another environment useless.

With some of the focus of launch titles usually being on better graphics and bigger moments to be memorable, Knack appears to be focused on enjoyable game play. Now don’t get me wrong, the graphics definitely look great but it’s always good to have a variety of games available at launch. To see Knack grow from 3 ft to 30 ft and capable of throwing cars at tanks or helicopters is something that I know I can definitely have a lot of fun playing. So Knack is on my list of games I will be playing after the PlayStation 4 is released.