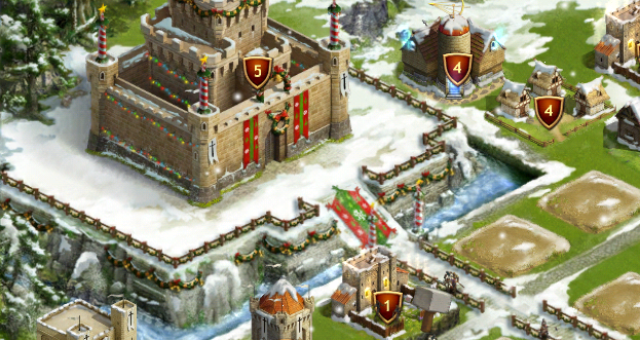 Kingdoms of Camelot Battle for the North Impression

Since I play the Hobbit: KOM I get bombarded with pop-ups and messages to play Kingdoms of Camelot: Battle for the North and I finally started it a couple of weeks ago and it’ll be a little while before I have a full review. But my first impression of it, besides it being very similar to Hobbit KOM, is it feels a little more refined in terms of game play. There are still the 3 maps, city, field and world, and the resource types are the same, but the equipment system is usable now and there are animations and not just in battle. It’s pretty cool to see citizens walking around in the city view and yes I know it’s just dressing but it doesn’t feel so empty. I also think the fact that I won 5K tier 4 troops from an Esclados Mystery Chest has contributed to that feeling and I can’t wait until my city can support all of them. There are still microtransactions and a waiting period for everything you build or research, but since I haven’t maxed out yet and I can only play here and there throughout the day I don’t mind it for now as an additional game on the go.