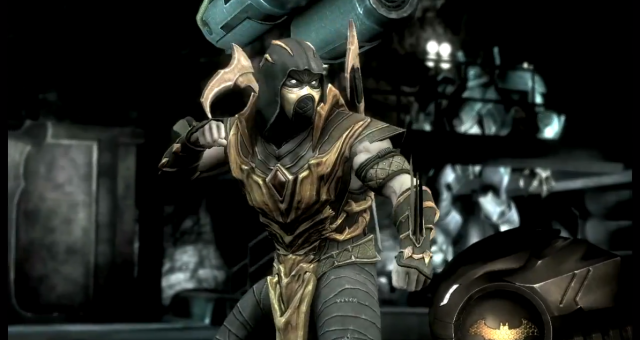 NetherRealm Studios announced that its next DLC character for Injustice: Gods Among Us is a blast from the past with crossover appeal from the Mortal Kombat series. The Scorpion DLC is here…well, almost here for those without season pass. The redesign from Jim Lee makes the newest character, Scorpion, look brand new and more dangerous than ever. Of course the announcement alone wouldn’t be enough without some kind of gameplay footage shown so a full 2 minutes of incredible gameplay was released and you can view it here. He takes on the Black Lantern Superman and his full arsenal is on display from the combos to the super move and everything in between. Some of the combos will be easily recognizable and yes Scorpion’s teleportation attack is used alot in this video to the delight (or dismay) for those familiar with the character. If it’s any consolation I doubt the majority of players will be able to execute that move as flawlessly as the player in the video. Scorpion has more than a new look because the game play in Injustice would require Scorpion to have his own badass super move, which starts at 2:57 in the video, as well as a character power, meter attacks, etc.

I personally think Injustice Gods Among Us is better than Mortal Kombat vs DC Universe and to now have Jim Lee designing Mortal Kombat characters it’s as Ed Boon said, it’s a “full circle moment.” I’ve been thoroughly enjoying Injustice and even though it’s all DC characters so far I am excited for them to have a redesigned Scorpion. Are you happy with Scorpion being available or would you have preferred another DC character? The Scorpion DLC is available for those who have the season pass now and will be available June 11th for everyone else