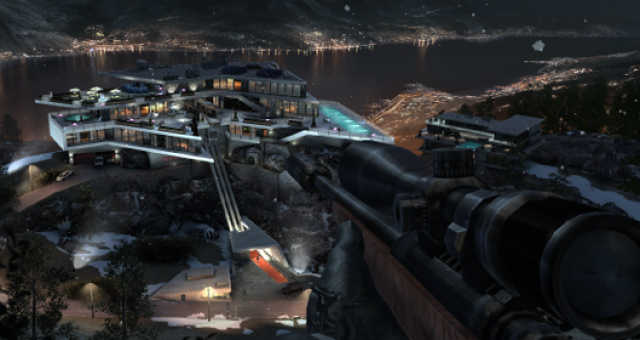 One of many things Hitman: Sniper has going for it is the way it pushes you to be as creative as possible in getting kills in order to rack up points and/or advance to the next mission. It can be entertaining but if you’re at  a loss of how to achieve a specific kill or locate items then I have you covered with this simple guide to Hitman: Sniper kills. Even if you don’t have to achieve a certain kill in order to complete the mission it’ll still help you to rack up more points and climb the leaderboards. First, it’s good to know some basic tips to help you plan your kills in advance for the most points:

The first chapter has 10 missions, and even though some of the missions have the same final target they have additional objectives added. Here’s a guide for the first 5 missions. For the remaining 5 missions check out Part 2. 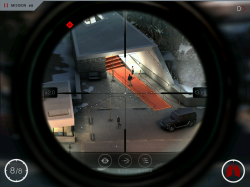 Kill Marcus Krug: Mission is as simple as it gets. Simple tutorial showing controls.

An easy way to accomplish this is to get an environmental kill with Marcus Krug and his bodyguard so no one becomes suspicious. This could net you over 200,000 points easily. Just wait for Krug to walk to the balcony with his bodyguard and shoot the fire light fixture to the left of them. (See picture below). Once that’s done you can just eliminate a solo guard with a headshot, such as the one near the vans. And then make sure to eliminate Basia with a headshot to complete the mission.

This one might seem to be tricky at first but it can be done easily without trying to single out guards or conceal bodies. Since headshots are required you can take them out using environmental kills. And here’s where you can learn a double kill you can use in other missions. You might’ve already noticed the guard patrolling near the vans but you might not have noticed the guard on one of the balconies not far above him. Shoot the van on the right (closest to the light) to make the alarm go off. Move the reticle up to the balcony and wait for the guard to lean on the glass. Once he does, shoot the glass and he’ll fall on the one checking out the van. Instant double kill and no suspicion. Tap out to zoom out quickly because you can still get the environmental kill of Marcus Krug and his bodyguard mentioned in mission 2 for the 3rd guard (and a lot of points). Select the 4th guard of your choosing and then eliminate Benak. Remember to hide bodies by shooting them in order to move them off cliff. Mission complete. 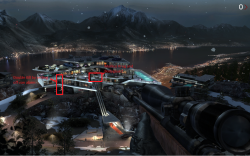 This one gives you a break and is very simple. It’s perfect to rack up additional points by taking out extra targets. If that doesn’t interest you then just take out the guard right in front of the jacuzzi to the left with a headshot and he’ll automatically fall into it. You can just kill Krug at any point after that. 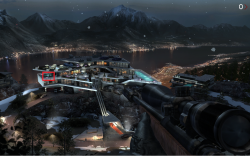 Don’t be daunted by the total score because this mission is pretty much combining your kills from the previous missions. Now, you have to achieve 125,000 before you end the mission so before killing Cabasso make sure you have enough. Get the double kill by distracting the guard with the car alarm like I mentioned in Mission 3. Kill Krug and his bodyguard with an environmental kill. Next take out all the guards next to environmental hazards so you don’t raise suspicion. If you do, wait until the guards return to their normal routine. Even if you don’t miss a shot, I’ve had the guards raise the alarm just from too much activity at one time. So look for any single guards and take them out one at a time. Once you have enough, finish by killing Cabasso and you’re halfway through Chapter 1. 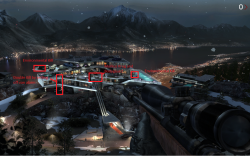