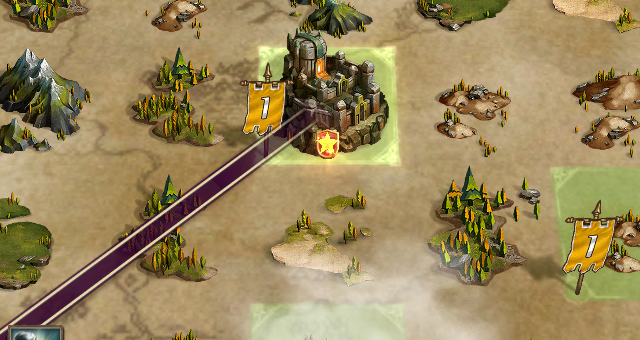 There was a recent update that had its features gradually rolled out with the biggest change being Gem Mining in Hobbit: Kingdoms of Middle Earth added. I’ll get to that in-depth briefly but there was also a graphical change so now the world map is in glorious 3D. The functionality is the same so you can’t explore the map as such but it does look great. So here’s the list of all the changes/additions in the latest update:

Gem Mining allows you to enhance the stats of your gear even further, and there are no restrictions as to which gear you can update with your gems. Like just about everything else in this game there are tools are shards you need to be able to use this feature but it’s pretty straightforward once you learn the basics. The first thing that’s important is to know how to locate Goblin Caverns or else you’ll just be hoping for the game to give you gems and gem shards to use. The answer is in your Watch Tower, which you’ll notice has a new “Search” tab added. On this screen there’s a Center Point, which you can change, and a Range, which is the number of tiles your search will cover from the Center Point. You’ll also notice a timer and that’s because you can only use this feature once every 5 hours, although your search results will remain. There are different types of Goblin Caverns with Extraordinary being the best, and despite being able to select any of them from the list, the ones with a pickaxe next to the type are being mined by other players so you’ll have to fight to gain control of it. There are usually plenty of caverns so you won’t have to worry about not having any to mine without fighting. There is also no limit to the number of Caverns you can mine at one time but it does cost a Dwarf Pickaxe in addition to a hero and troops each time. The rewards you get for mining vary based on the type of cavern you select, however you will always receive at least gem shards if you successfully complete the time it takes to mine.

Once you finish mining you can keep track of all your gem shards in the Sage’s Tower under the Relics tab. You’ll notice 2 items you can create using your gem shards, the Artamir Gem and an Ancient Drill. The Ancient Drill is used to open new slots on any gear in order to add a gem to it, and so far I can get up to 4 gems per piece of gear. The impressive thing about this new feature is if you have 4 gems of the same level, you can combine them to create an even more powerful gem. This can be done by selecting the Forge and then the new “Gem” tab. You just simply select the gem and if you have at least 4 of them you’ll be given the option to combine, creating a higher level gem. The stat buffs for the different gem levels are as follows:

So far I see up to 4 levels to increase a gem. And embedding a gem isn’t permanent so you can always swap them out for a higher level gem. And as you can see the buffs are similar to enhancing or upgrading gear so the higher levels are relatively impressive.
Now, you can add gems to your gear either through the Equipment tab in the Forge, the Gear icon on the toolbar or selecting Equip when viewing a heroes gear through the Great Hall. Simply select the new Embed option, and the next screen is straightforward, which shows you the gems you have the slots you can use. Remember, to unlock a new slot you have to use an Ancient Drill. The buffs for higher level gems are good but the ONLY buff that is applied to your gear is the one that belongs to that gear type.

So, for example, if you’re equipping a gem to your sword, you will only receive the Attack buff. You can mix and match to achieve your overall desired effects. I do like the addition of gems and gem mining, and not just for the stat buffs but the PvP and additional tasks that can be performed while playing. So I hope this simple guide helps, and have fun.