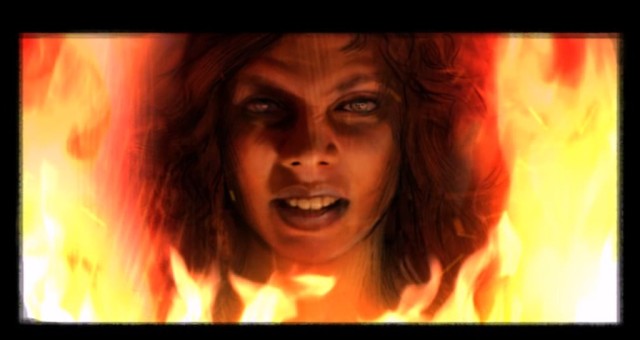 I have very fond memories of the majority of games I played growing up and Gabriel Knight, Jane Jensen’s classic game, is definitely one of them. I haven’t played the original in an extremely long time so my memories pertain to the fun I had playing it and major moments in the story as opposed to the actual gameplay and puzzles. I’ve always wanted to play it again but worried about it being dated but now I don’t have to worry about that thanks to Phoenix Online Publishing releasing Gabriel Knight Sins of the Fathers: 20th Anniversary Edition. It’s set to be released October 15th but I got a hands-on preview of the demo that’s available now and it jogged my memory of why I enjoyed this game so much. As soon as the music started on the title screen I could feel my excitement rising greatly but I couldn’t let nostalgia cloud my judgment completely of this edition. In case you’re not familiar with Gabriel Knight, it’s a mystery adventure game where you play as the protagonist of the same name, who is a Schattenjäger (shadow hunter), and it’s set in New Orleans. However Gabriel Knight starts as a struggling novelist and bookstore owner who comes to learn of this fact while investigating a string of voodoo-related murders for a new novel. Yet he starts to uncover a conspiracy that is somehow connected to the dreams he’s been plagued with his entire life. 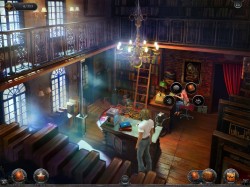 It opened up with Gabriel having a nightmare that included a woman changing forms before the start of Day 1, and it never looked so glorious. That’s the first thing I noticed before Grace walked by outside the bookstore to get the day started, and that’s how great the graphics looked. The photo-realistic images outside and inside the bookstore were incredible to look at and the amount of time spent recreating this was apparent. It took me a moment to get used to the voice acting and accents when Gabriel and Grace started talking about his night, messages and while she explained to a woman on the phone that Gabriel wasn’t available. This was due to the third accent of the narrator and the initial jolt of the first 3 voices having 3 different accents. It made sense when Gabriel read German fluently and Grace stated she wasn’t originally from New Orleans, and that just left the narrator with the New Orleans accent. I couldn’t help but feel excited when checking out the room and controlling Gabriel. Sometimes I just checked things to hear the reaction, so I know that Gabriel’s fridge has a horrible smell from old food, and sadly that’s an experience I have been familiar with on occasion. The controls were simple with the left mouse button controlling everything from Gabriel’s movement to interacting with objects, and the right mouse button just being a placeholder for your middle finger. When you click on a person or object, options open up that include touch, use, talk, look or use a selected inventory item on. Considering the sheer number of options this is actually convenient, and even though the options are often whittled down based on the person, object or situation, it can make puzzles more challenging trying to figure out what to do next. You can also double-click on a spot on the screen to make Gabriel walk much faster, and I did this often since the walking mechanic could be relatively slow at times. 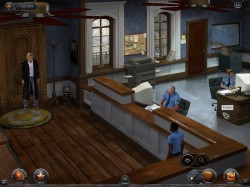 You can click on the icon at the top left that shows the score and it’ll highlight all the available items on the screen that you can interact with so that helps in many situations. The layout at the bottom of the screen is simple but effective. There’s a journal so you can see all the progress you’ve made, a hints system that truly works, your inventory, and the city map, which allows you to travel to any available location with the push of a button.

The inventory system is pretty handy, no pun intended, and when you select it, your inventory overlaps the current screen and you’re given the usual options to look at an item for a brief description or examine it close up. There’s a third option that allows you to combine items and this took an extra second to follow. You always have an active item in your inventory and when you select the combine button it highlights all items that can potentially be combined and if you successfully choose an item that can be combined with your active item you’ll have a new item in your inventory. If not, your active item will become the last item you selected. There wasn’t much use for combining items in the preview so there isn’t much more I can say about that. 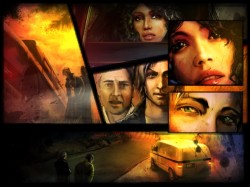 In terms of the story, after chatting up Grace and getting all the latest info I decided to make a trip to the police department to talk to Detective Mosley except he was at a new crime scene. So through some interesting puzzles and ingenuity I was able to locate the crime scene. And I was pleased that the puzzles were more than just combining items or finding something but actually paying attention to one’s surroundings as well. And there’s a neat feature in the journal that compares all scenes to the original 20 years ago, and it was a cool trip down memory lane seeing those images. I was becoming really engrossed in these events due to the ambiance ranging from the locations to the characters. When conversing with characters there were many current topics to discuss but it was still possible to learn more about the history of Voodoo and Hoodoo in New Orleans, and this just added to the story. 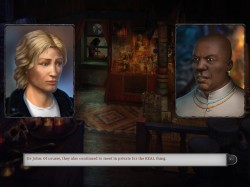 The characters were as varied and rich as I could hope, and I couldn’t help but be pulled into its world. I was able to play a couple of days in the demo and whether it was looking for evidence at a crime scene in an interactive and fun way or just relaxing and brushing up on my German by reading some poetry by Heinz Ritter, I found myself thoroughly enjoying this. So I’m excited and looking forward to playing the full game, and it’s not just because of my fond memories from when I was a kid but how much fun I had playing this current edition.  Gabriel Knight Sins of the Fathers: 20th Anniversary Edition is set to be released October 15th.