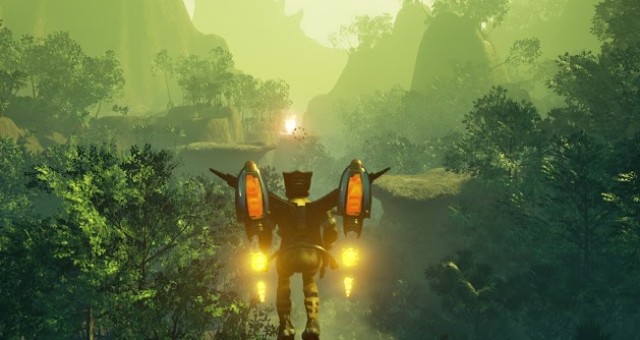 For nostalgia purposes I have a case of CDs of classic PC games that I enjoyed and somehow they managed not to fall victim to one of my many purges of old software. One of those games is MDK 2, the enjoyable sequel to the 3rd person shooter that put the burden of saving the Earth from an alien invasion on the shoulders of a janitor, who just happens to be the closest person to the mad genius who created a near indestructible suit. It was a really fun game that offered a great mix of gameplay options, cool designs and witty humor. Enter almost 20 years later a game called First Wonder, which is being developed by Rogue Rocket Games and is being referred to as the “spiritual successor” to MDK. That’s partly due to the fact that RRG co-founder Nick Bruty created it and designed the art in MDK as part of Shiny Entertainment. The similarities might not seem apparent at first but that’s because First Wonder is designed to be so much more than that.

First Wonder takes place on the peaceful Planet Majorca. Things change when an off world corporation convinces them to give up their land in order to build a luxury resort, digging deeper into the land than ever, and awakening an ancient evil, Monstro, in the process. Not one to concede defeat, the Cargonauts decide to take on Monstro using their rocket technology since this was to be the biggest job of their lives, and now they could gain ultimate fame and honor if they defeat Monstro. The problem is Monstro has incredible natural abilities that allows him to take advantage of the vertically inclined topography of the planet. But with the Cargonauts technology they can try to match Monstro with various upgrades and teamwork. 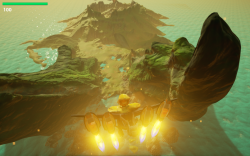 Key Features of the game include:
Check out the teaser trailer here:
My first impression of First Wonder’s multiplayer mode from the demo was filled with thoughts of Evolve, the game that allows players to control either a team of hunters or the monster in a battle to the death. But that’s only because First Wonder pulls in the gameplay of another classic game Giants: Citizen Kabuto, which pitted players against the giant Kabuto. The biggest difference incorporates the Cargonauts rocket technology into the game play on a landscape that could be breathtaking at times since it seems to have no limit to how high you could climb. Watching the developers play on their twitch channel I was surprised at how fast the gameplay was, and it looked like a blast. I saw the sheer power of Monstro and how the Cargonauts didn’t stand a chance attempting to go toe to toe with it. Especially since Monstro could use the environment such as making weapons from the native plant life. So strategy was a necessity including using the environment against Monstro.
There’s no doubt that First Wonder will have some of the wit and impressive design that propelled MDK when it was released turning it into a classic. But will the gameplay feel revolutionary in the same way that MDK felt? Check out the 30-minute multiplayer demo and see for yourself. However, keep in mind that this is still a work in progress, and a Crowdfunding campaign will be launched later this year. So if you’ve been looking for another sequel to MDK or just a new game with an interesting twist for gameplay then you’ll want to check out First Wonder.