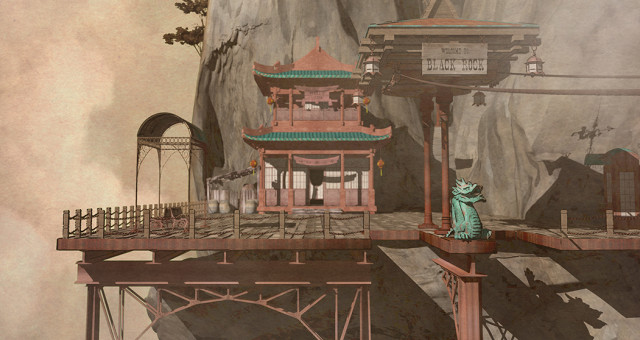 It’s easy to be overwhelmed with the number of kickstarters out there, and it’s just as easy to miss a really interesting one. Orient City: Ronin & The Princess, an upcoming spaghetti western created by Ryan Colucci and Zsombor Huszka stood out to me for a number of reasons. It’s a mix of the classic American Wild West and Feudal Asia so it takes place in its own world with a unique setting. And Orient City will be a hand-drawn animation so the style could truly be memorable in a genre that has gone away from that for the most part. And after watching the film’s opening sequence I believe in that even more. Orient City follows the story of Boshi, a fallen samurai who has vowed to protect Nessa, a young girl who is the sole survivor of a family that was brutally assassinated. Instead of spending their lives on the run they decide to head to Orient City to get revenge on those responsible. 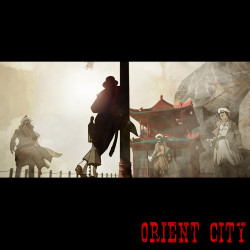 The opening sequence for Orient City shows the layout of the city relative to the world-at-large. It reaches high above the clouds, and the difference between the lives of its inhabitants is as great as the distance between the top and bottom of the structure. At the top of Orient City are the filthy rich, who live extravagant lifestyles wasting more than the poorest at the bottom of the city will ever have. There isn’t any action shown during this sequence, and obviously this will be a huge factor in determining the overall animation quality. However, there’s an undeniable appeal due to the compelling visuals seamlessly blending steampunk with traditional anime styles. Check out the opening sequence below:

For more information about Orient City: Ronin & The Princess visit the Kickstarter page. It’s definitely worth a look. Ryan Colucci is no newcomer to this type of project as he was a producer on Battle for Terra: 3D, an animation released by Lionsgate in 2009. And looking at the cast now it was incredibly stacked. And with Zsombor Huszka’s experience animating videos this is one project I’m looking forward to seeing.