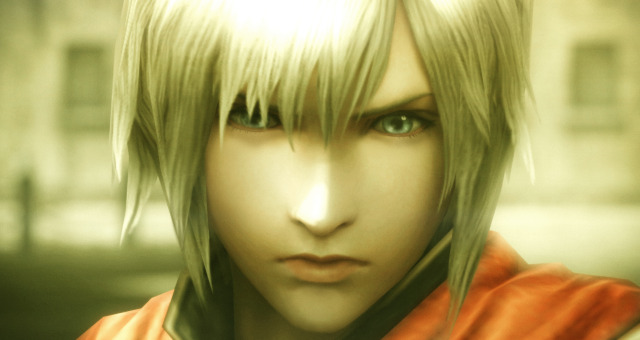 Final Fantasy Type-0 HD is the latest Final Fantasy game to receive the HD treatment after being released in 2011 for the PSP. It’s an action RPG set in the land of Orience, which is divided into four nations where the hostilities can run high. You assume the role of Class Zero, a group of 14 students from an elite military academy when your country of Rubrum is attacked by the Militesi Empire. You have to use all their combined skills and might to repel this attack leading you down a path that uncovers the truth about this ugly war. It’s set to be released by Square Enix on March 17, 2015 for the Playstation 4 and Xbox One. I was able to get a hands-on preview of it during NYCC, and I came away impressed with it.

The hands on demo started with just 3 characters: Ace, who wields a versatile deck of cards containing various attacks; Rem, a powerful magic user who also wields a pair of daggers; and Seven, a tough student who wields a Whipblade that changes length at will. I was able to switch between the characters at any point with the other 2 characters becoming automated. I started off using Ace, and it didn’t take me long to get a hang of the controls in this fast-paced action. Each character has a basic attack, a magic attack, and a character-specific ability. You can also defend by either blocking or evading attacks by dodge rolling. You can lock on targets and then cycle through them effortlessly with the D-pad.

I enjoyed using Ace, whose character-specific attacked varied based on the random card selected, and I was informed that his deck accurately had 53 cards in it. When used, a random card would float above ACe and selecting the attack again would have the card attack the targeted enemy with the related effect. It was possible to draw up to 4 cards from the deck before firing them at an opponent, and this would increase the overall strength of the attack. Sometimes the effect wasn’t an attack at all but a healing or stop effect. He was also best for ranged attacks out of the 3 in this demo. Of course there’s the standard HP and MP, which can also be recovered by absorbing orbs from every enemy you defeat. I did use Seven and Rem, and all 3 characters felt very different. Rem’s magic attacks felt much different from the others, and was a lot of fun to use. Since I wasn’t able to upgrade characters and/or abilities in this demo I’m not sure which of her magic attacks were just due to being at a higher level than the others or unique to her. She also has a character specific ability just like the others. And Seven with her Whipblade just provided more variety for the gameplay.

The enemy waves had a variety of foes so it felt fresh as I raced through areas defeating them in order to approach the building I needed to reach. The camera control was decent, and once I became accustomed to targeting and attacking enemies quickly it became less cumbersome to scan the area to see if any enemies were still around. There were certain points where you could choose a path to take, and in the hands on demo I opted to take the longer path in order to see and play more of it. The graphics were pretty good, and the ambiance was definitely Final Fantasy from the music to character and building designs. I didn’t get to see much of the story since it focused just on the areas where you had to just fight enemies but in terms of creating an atmosphere that was representative of a large-scale war, the pace was very intense so I can only imagine how much the story would enhance that. One thing that definitely enhances the gameplay is summoning Eidolons. It requires the special bar to be filled up and once you summon the Eidolon it replaces your character for a period of time. I was able to summon Ifrit, who was huge, and it’s fair to say that I was pretty excited using it. The massive power and fire-based attacks were an engrossing change of pace, and I’m looking forward to seeing more about using Eidolons.