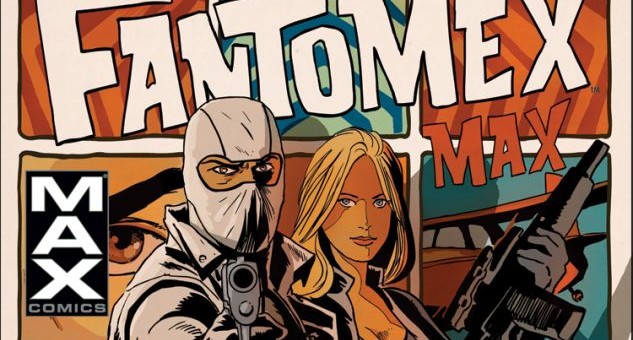 With the anti-hero Fantomex receiving the solo treatment, I had to make time to speak to Andrew Hope, my friend and writer of the new series, at NYCC. Fantomex has appeared in various X-Men titles and recently as a member of Uncanny X-Force where he underwent an ordeal that drastically changed his make up. But with issue #1 just released earlier this month I wanted to give a glimpse of the writer behind the series with a little humor while remaining as spoiler-free as possible for what’s in store.

Me: I read the issue and I enjoyed it a lot. I understand that it’s the first issue in the series and when it comes to comic books I like to take the whole series in before I give a final judgement. I think it’s important to give a writer some leeway to see what stories they’re trying to develop because you can’t have everything in one issue. But I do have a few questions I want to ask you and not just about the comic book but your experience here in general. Is this your first time at NYCC?

Andrew Hope: yep this is my first time here and only my second convention in general.

Me: So what do you think about it?

Andrew Hope: oh it’s incredible. I have definitely never seen so many people in one place before in my life. And it’s amazing that it’s all people who are comic book fans. I’m really happy about that. 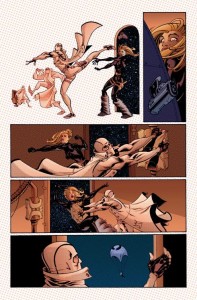 Me: Is this your first time in NY?

Andrew Hope: No this is probably my 20th time. I’ve been coming here since I was a baby actually . I’m from Scotland originally but I have an aunt that used to live in Queens and we used to come and visit her once or twice a year.

Me: But this is your first time here as a celebrity?

Me: When you walk down the street do you tell people to get out the way?

Andrew Hope: No they just get out the way automatically

Me: That’s even better,  they don’t do that for me. When I think about Marvel comics now, and as you know, the movies are huge. The movies are appealing to people who don’t read comic books as well and sometimes that can be a gateway for them to get into the comic books. Since this is issue #1 of a character that can be described as an anti-hero, do you think there was any pressure for you to write him a certain way considering that if it is very successful there might something down the line when it comes to movies, or were you just focused on writing him solely for a  comic book?

Andrew Hope: Actually, that’s an interesting question and it has two answers. The first answer was when I was told that Fantomex would be the project, I was concerned with how closely I had to write him to either be very similar to Grant (Morrison’s) version or Rick Remender’s version, and I was told by Axel Alonzo that this was to be my version. As long as I stayed faithful to the personality of the character which I’ve believed I’ve done.  Second part of the question is in terms of the movie aspect. I’m a screenwriter by trade so I approached the Fantomex mini-series from the same structure as a screen play with act 1, act 2 and act 3. So in my mind when you’re  in comics these days, you’re writing them with the potential that it can develop into a franchise, either live-action or animation, so I approached the writing with the philosophy that  it would be easier to adapt this particular story into an animated feature or a movie.

Me: Ok so it makes sense that there was no added pressure because it’s something you have experience with

Andrew Hope: Exactly, there was no pressure from Marvel at all

Me: So what challenges did you face in writing your own series?

Andrew Hope: Um, there were a couple of scenes that were kinda reworked because of a couple of things, (either) Marvel didn’t feel that they worked visually, my content was edited because it was kinda too far out there, and they gave me some suggestions with things I could incorporate. But there was no pressure to include other characters, or anything like that. My motivations, my character arcs, my set pieces, my sequences were all fairly strong just from the get go

Me: I know this is a limited series for now but do you have plans for him that you would like to see in the future

Andrew Hope: Well it’s all up to Marvel, if the book sells well they’ll probably requisition a sequel. And with that in mind I’ve kinda seeded some easter eggs in the story that if a sequel is green lit they can certainly explore those seeds in the future

Me: As I said earlier I want to see where the story goes and how the characters interact but I do know there was a slight bit of controversy regarding sexism in the issue and I’m sure that you’re aware of that now. Do you want to address that at all? 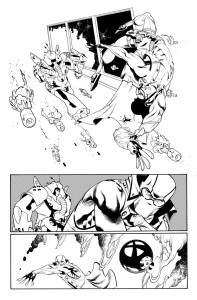 Andrew Hope: Oh totally, and actually thank you for bringing it up. I read the review that said that the book was sexist, misogynist. The sexism and misogyny I do see that and that’s actually intentional.

It’s intentional because it’s the beginning of a character arc for Eva the holographic character. So, um, it kinda ties into the arc and you can’t judge an unfinished piece of work. Once you see the finished piece of work, you will see that character evolve into somebody that, I don’t want to give any spoilers away of course, but she appears in issue 1 that way for a reason and it’s related to her character growth.

Me: So it’s basically something that people will be happy with once they see the final product

Andrew Hope: Well happy is somewhat subjective but I think they will see what my plan was which i think I believe is the important thing

Me:Do you have any titles planned for the future?

Andrew Hope: Well my agent sent in my pitch for Captain Britain a couple of days ago and it’s a complete reboot from top to bottom.

A Captain Britain mini-series? I’ll be on board for that, however I want to enjoy all that is planned for Fantomex in this series first. If you didn’t pick up the first issue there’s still time before issue #2 is released so definitely go check it out