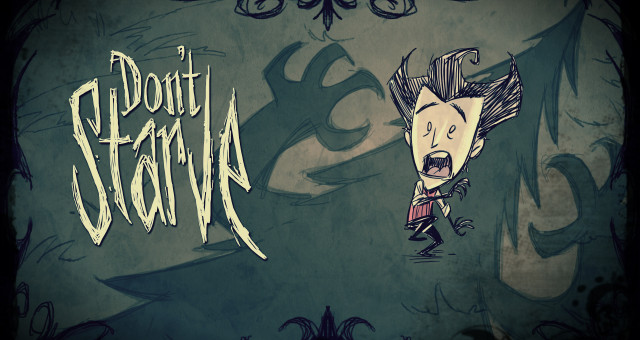 (Hulking Reviewer: Don’t Starve is a game I’ve been meaning to play since it was originally released on the PC last year but due to circumstances that didn’t happen. It’s an action adventure game developed by Klei Entertainment about a scientist who starts to receive a signal from his radio offering to teach him forbidden knowledge that would help him become successful in his scientific endeavors. Only when he accepts does he realize he’s been tricked and he’s transported to a mysterious island where he’s forced to survive. It was released this month for free on the Playstation 4 for PS Plus members and I still intend to play it. My friend Dave has been talking to me about my site for some time and this was the perfect opportunity for him to get his first post on here, and his review Don’t Starve. Good stuff.)

In Don’t Starve you play as a scientist who is thrown onto an island. The goal is simple: survive as long as you can with whatever you are able to find while battling hunger, sanity, and the locals. Folks, this game is tough. How tough? I’m talking “We’re so cool we’re not going to give you a stinking tutorial!” tough. The title speaks for itself. Don’t Starve was my guideline for my early attempts at surviving the island. I wandered around harvesting carrots, berries, twigs, and grass with no clear goal as what to do with it. I explored the easy to navigate menus to discover that with the right materials I could create necessities such as a torch, bonfire (learn to do this early), hunting and gathering items such as axes and a pickaxe. It took a few tries to survive the night, which was a satisfying accomplishment.
Eventually, I learned to build animal traps to catch bunnies. I felt like a champ when I threw pine cones on the fire to keep it going and cooked foraged food to keep myself alive. What makes the game easier to take in are the visuals as Don’t Starve has very slick visuals in the style of a Tim Burton movie, reminiscent of the Beetlejuice cartoon. The island’s personality is in the vein of “Lost”, with standard hunting and gathering mixed with sci-fi weirdness that makes it a joy to explore.
Of course, there is more to the game than sight-seeing. Dangers are aplenty on the island: spiders, bees, and monsters are a few of the inhabitants to worry about. The good news is as you learn to survive longer and gather more material you gain access to awesome items such as a fire put, spear, and a farm to harvest food. Be careful though, the better you get the more it attracts other members of the island.
If you get bored with the open-end mode, there is a mission mode that sets you with goals and limited resources. Just keep sharp items far away. The game has a “morgue” that tracks the various ways in which you have died. You can also tweak the world a bit to your liking, though the island is always randomized.
In conclusion, Don’t Starve is a slick-looking game that manages to be enjoyable despite it’s difficulty. Happy hunting everyone!