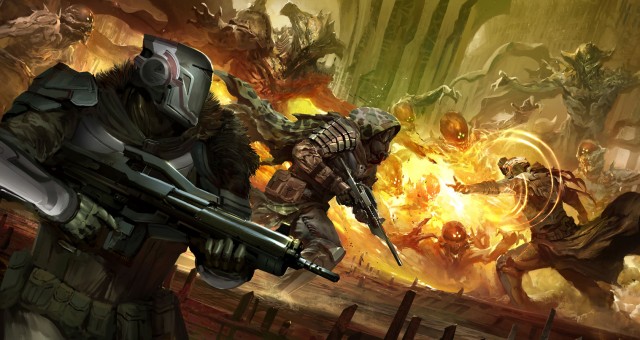 Destiny is a first person shooter developed by Bungie Studios, the creators of Halo, that seeks to be a revolutionary FPS.  It will be an always online FPS that will also have co-op and multiplayer mode. You can play the game solo but from the information released today there will still be other players occupying the same world as you.

It’s set in a future where humanity was able to explore and inhabit the solar system but was defeated and pushed back by unknown foes. As time passes some of the planets once occupied by humanity are being explored again and obviously things are much different.  You’ll be playing as a guardian of one of the last cities on Earth. Below is Bungie’s official synopsis of the game:

“Everything changed with the arrival of the Traveler. It sparked a Golden Age when our civilization spanned the solar system, but it didn’t last. Something hit us, knocked us down. The survivors built a city beneath the Traveler, and have begun to explore our old worlds, only to find them filled with deadly foes.

You are a Guardian of the last safe city on Earth, able to wield incredible power. Defend the City. Defeat our enemies. Reclaim all that we have lost.

The premise does sound very interesting to me and the little bits of gameplay that are shown scattered throughout the video released here. I definitely want to see more. I’m not a fan of always-online games but I’ll reserve judgement on that until more information is released. And I hope the game looks as sick as the concept art