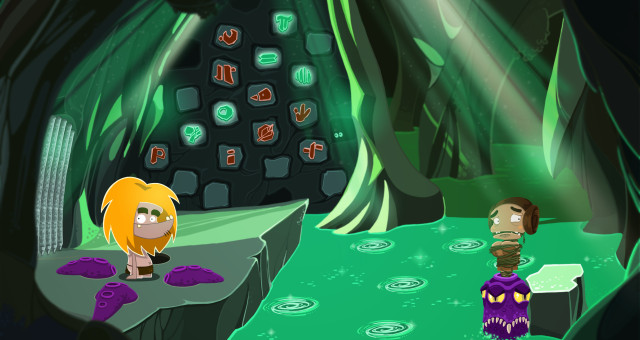 FIRE is an upcoming exploration adventure game developed by Daedalic Entertainment set during the Stone Age and featuring Ungh, an unlikely hero. Ungh is a clumsy Neanderthal who is responsible for all the bonfires going out in his tribe’s village and so has to go on a journey to discover and bring back new fire. It’s as quirky as it sounds but Ungh won’t go through this entire journey alone as he’ll encounter other creatures ranging from mammoths to bats, and even dinosaurs. Since Ungh doesn’t have a clue where to find fire he’ll have to explore every corner of the world at-large in order to locate this mysterious element. So of course this means that as Ungh you’ll encounter interesting puzzles you’ll have to solve, and the game play mechanics reflect Ungh’s natural reactions to the environment around him. He doesn’t speak but his reactions vary when you click on or hover over different objects in the environment, giving you clues as to how to solve the various puzzles. A day and night cycle also factors into the game play as the wildlife reacts differently based on the time of day, and of course nocturnal creatures are only available at night.

The screenshots for this point and click adventure look unique from the environment you have to explore to Ungh’s appearance. And where as other point and click adventure games usually have a protagonist(s) that offers witty commentary when examining objects, deciphering Ungh’s body language can be an entertaining mechanic. Check out the teaser trailer below to get your first taste of the Neanderthal hero. FIRE is set to be released later this year.