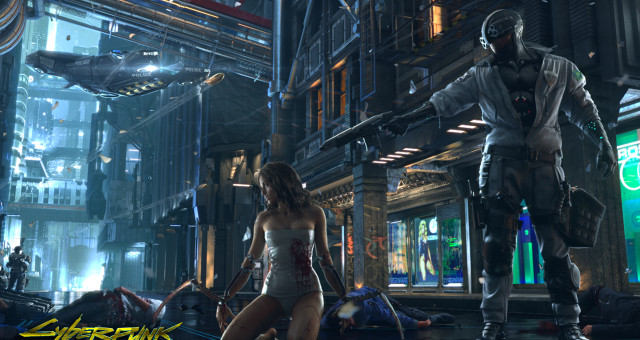 Cyberpunk 2077 is a RPG developed by CD Projekt Red and based on the tabletop role-playing games of the same name. However the game is set in the year 2077 where the advances in cybernetics is marred by the degeneration of society so for every potential benefit there is a potential disaster as shown in this teaser trailer. It’s set in a fictional city called Night City, which is in California near Los Angeles. It’s a city filled with violence, drugs and poverty and ruled by competing megacorporations who have created something called Braindances. Braindances are digital recordings of a person’s experience and a form of entertainment that allow another person to have those experiences directly transmitted to his or her brain via a BD player, a cybernetic augmentation. So for example, you could experience first hand the recent Skywire event and not just the adrenaline or sweat but the sounds and everything else about it. Naturally this can create problems and not just addiction but through the creation of “illegal” braindances where the user can experience first hand the acts of a serial killer and feel the same sensations as the killer.

You play the role of a character who starts out with nothing but a desire and the will to rise above the violence, drugs and every other pitfall including the machinations of the megacorporations as well as street gangs. CD Projekt Red states that Cyperpunk 2077 will be a nonlinear game set in a sandbox world where every game play mechanic will have a purpose. And their goal is to implement features reflective of a deep RPG system where the character development based on choices or upgrades you choose will directly impact available dialog options as well as affecting  the ways you can accomplish your tasks. And as always you can expect a mature story from CD Projekt Red.

I admit I never played the tabletop games and it was CD Projekt Red’s involvement that brought my attention to it. And after looking into Cyberpunk 2013 and 2020 my enthusiasm for this game has increased tremendously and it was already high before. So I can’t write as a fan of the original tabletop games and hope this game remains true to it but I can hope that CD Projekt Red is successful in developing this game the way they laid out here. And they state that they “are working very closely with Mike Pondsmith to ensure that the unique feel of the original, paper game is preserved intact.” Open-world RPG, game play options based on skill upgrades and a mature story based in a future where cybernetics are available? Sign me up.