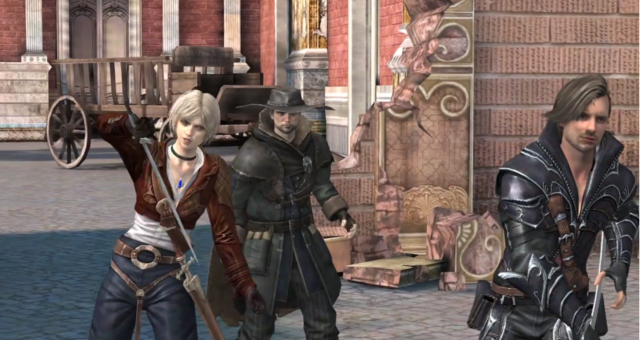 Bloodmasque is an action RPG game being developed by Square Enix for iOS devices. It’s set in 19th century Paris, which is another way of saying this is a game featuring vampires with you as a vampire hunter. It’s really not another way of saying that but since vampires apparently have a profound taste for culture in the majority of their portrayals this would be an understandable setting. But you won’t be playing as just another vampire hunter, you’ll be playing as yourself as a vampire hunter. In Bloodmasque you will take a photo(s) of yourself and customize your character’s appearance based on that. So if you’ve always wanted to be a vampire hunter here’s your chance. Granted it’s definitely a nice touch but this wouldn’t be one of the games I’m looking forward to if the game play mechanics and story weren’t fascinating to me.

In the game play trailer on the official site the action bears a resemblance to the excellent Infinity Blade series and your attacks, counter-attacks and defense is based on a series of successful swipes and taps. There appears to be a greater range of movement during battles and that would be a very welcome game play mechanic. Your character is a master swordsman in a city ruled by vampires. That’s not all you’ll have at your disposal because you have vampire powers as well and you’ll definitely need that to defeat some of the enemies you’ll face in this. And you don’t fight alone either. You’ll fight with a party of hunters and it’s just my guess but it appears that you’ll be able to customize some of those faces as well to resemble actual people you know.

Vampires, swords, abilities and being able to see myself running around 19th century Paris battling them? Why can’t I download it in the app store now? It’s set to be released later this summer.