There are a number of adventure games I’m looking forward to this year so I was fortunate to be able to get my hands on one of them, and that’s the fifth and final installment in the Blackwell series by Wadjet Eye Games. And I’m very impressed with the Blackwell Epiphany preview I was able to experience and can say that fans of the series won’t be disappointed. The last entry had Rosa and Joey confront a mysterious figure named Gavin who not only had special abilities that proved fatal for everyone he manipulated but he was also part of a secret organization that knew about individuals like Rosa and actively sought them out for nefarious reasons. This organization referred to these individuals as Bestowers, and with Gavin able to control Rosa to the point where she banished Joey and kept him trapped in her mind more questions were raised than answered. And so the two of them made the decision to not just be reactive but take matters into their own hands and pursue this organization with their resources. 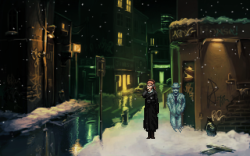 So my hands-on preview started with Rosa and Joey standing out in the cold in front of a building waiting for Detective Durkin to arrive. But instead he calls Rosa and tells her that he won’t be able to make it despite him originally asking her to meet him there, and that she should take a look around for anything unusual. He can’t tell her why or what she should be looking for but this is all part of their mutually beneficial arrangement. The controls are the same with the left mouse button used to interact with objects and the right mouse button used to look at objects. You can still move the mouse cursor to see the inventory of the character you’re currently using and can switch between Rosa and Joey at will. Rosa only has a coffee on her while Joey still has his gust of wind and tie to use. Rosa of course couldn’t get into the locked building so I had to switch to Joey in order to get inside and look for clues. It’s a dilapidated building and the tone is set immediately as it’s not only been abandoned but covered in graffiti. Only thing worthwhile is a note leaving a clue on how to get in. It wouldn’t take long to discover the ghost but I couldn’t follow her as Joey because of the distance from Rosa so I was back to square one. And in one interesting puzzle that would be the first to emphasize the need to coordinate Joey’s and Rosa’s actions I was able to discover the key to get inside by using the hot coffee to melt the ice around one of the bricks. 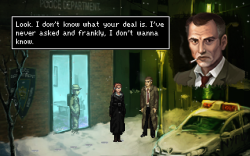 This coordination is made easier, for example, by the ability to call Joey back to you when using Rosa if you left him somewhere else. Of course I was required to help this ghost whose name was Mary by discovering who she was and how she met her end in this building where a drug raid took place prior. Solving the puzzles wasn’t too complicated but interesting. What was more intriguing was the backstory of this ghost, who was originally an actor, and the excellent social commentary in this series without being heavy-handed continues so fans who’ve always enjoyed that will be satisfied. And yeah, being able to call one character back or being able to click on links in Rosa’s phone after finding information are useful touches but my mind was blown at what would unfold after leaving the building. A masked man was waiting in the street with a gun but instead of shooting Rosa he would shoot another man in the shadows behind Rosa and then run away. The one shot was looking for Rosa and fears it’s too late now and says they will also find him. Even when he turns into a spirit he continues to repeat this and says he needs the bestower but Rosa and Joey don’t understand his fear of “them” finding him until they see his spirit get ripped apart somehow in front of them and vanish. Clearly the stakes have been raised and this immediately made the story, and the plot of this hidden organization a lot more intense. 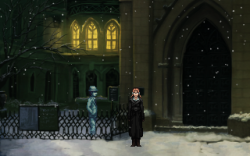 Considering this is the final installment in the series there are a lot of questions that need to be answered from Joey’s origins to the relationship between spirit guides and mediums. So for the first time in the series you have to play as another pair, and that’s Jocelyn and Madeline, her spirit guide. Madeline helped Joey and Rosa on more than one occasion including her connection to the Countess but this takes place in a different time period. And the personalities are very different from Rosa and Joey as you’re required to break into a store of a recently deceased person in order to steal some items. There’s another familiar face as Danny Marconi’s picture is on the wall because apparently he works there, or rather used to work there since the shop is closed and the counter is riddled with bullets. Madeline detects a spirit in need in this store and when Jocelyn rings the bell a voice calls to his assistant to answer but of course there’s no response. And when the ghost finally comes to the front apologizing for his missing assistant and asking how may he help the two of them it’s none other than…well now that’s a surprise.

I was able to play a lot more during my preview but this should give a clear picture about how ambitious the story is in this entry and it’s not shying away from the major plot threads that have been present throughout the series. And the puzzles will be just as challenging as before and paying close attention to the environment and details will be just as rewarding. And if my time playing it is any indication of how satisfying the Blackwell Epiphany will be then fans are in for a treat and a worthy conclusion to this series and the beloved characters. And if you still want more check out the teaser trailer below.