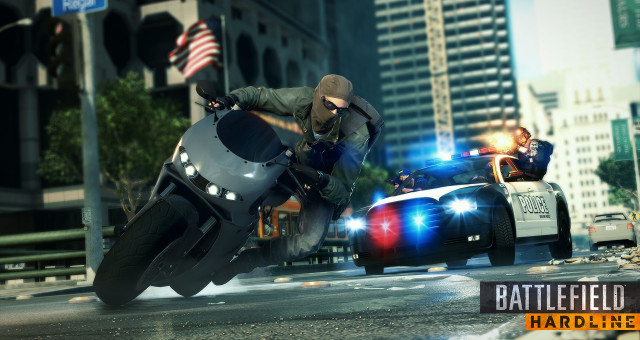 With the beta for Battlefield Hardline over, my first impression of it is somewhat mixed and it’s not because its game play is bad but the appeal of it as a standalone game for those who already own Battlefield 4. Now, it was a very limited beta so the lack of a campaign mode, which should be drastically different from any previous Battlefield, plays a huge role in my impression because there were just two multiplayer modes to play in the beta. In case you haven’t heard, Battlefield Hardline is a new entry in the Battlefield series and moves away from the war theme and instead focuses on cops and robbers in an urban setting. This new theme is not just skin deep as the campaign mode will feature a SWAT officer in an episodic style story mode similar to most TV crime dramas. This should make for an interesting change in the series and the potential for an engrossing story is definitely there, and that’s something I’m interested in playing. The multiplayer modes will still have destructible environments but the weapons and gadgets will be suited for cops and criminals so you’ll have tasers and handcuffs, for example, if you’re playing as a cop. Visceral Games, the developer behind Battefield Hardline, has promised new multiplayer modes that will highlight the cops and criminals theme, and there are videos on their site now showing heists and other game play features. However the beta was just limited to two modes, Heist and Blood Money.

Heist – As a criminal you have to loot packages from an armored truck and bring them back to an extraction point. Of course that means the cops have to prevent this

Blood Money – Money is put up for grabs in a location on the map and both sides have to compete to retrieve as much of it as possible. Whichever side reaches the specified goal first wins

Both modes aren’t entirely different from some multiplayer modes already available in Battlefield 4 or other games, and looting from an armored truck just replaces a bomb or some other item. However it was pretty fun to play these modes, and since it’s only a beta it doesn’t make sense to compare the graphics to what it’ll look like when it’s finally released. I had fun with heist and the controls were pretty tight when on foot or driving one of the numerous cars on the map. It felt really good and I enjoyed Blood Money as well. The classes have different names Operator (Medic), Enforcer (Support), Mechanic (Engineer) and Professional (Recon) but they’re pretty much the standard classes. You can customize your weapons, gear and gadgets through the money earned in multiplayer. I could see myself becoming engrossed in its gameplay except the more I played the more I felt like I was just playing Battlefield 4 DLC without any glitches. Granted this is just the beta so there are many other things that have been shown or will be in the full game when it’s released. So if I didn’t own Battlefield 4 this would most likely be a must-buy for me, assuming Visceral Games would deliver on what has been promised. In order to make that the case for me now I would need to feel more engrossed in the cops and criminals theme in all aspects, which is something BF4 can’t duplicate, as well as the gameplay being solid. There will be another beta period set for the Fall and that’s something I want to participate in again and get a better grasp of its gameplay.