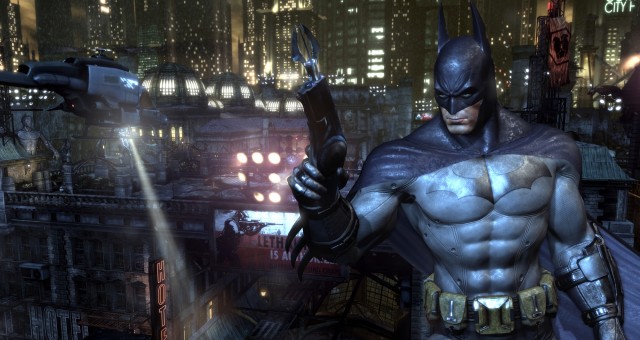 For those who were wondering when they would be able to get their next Batman fix in a form of a video game won’t have to wait much longer as Warner Bros has announced the next one, Batman: Arkham Origins. It’s set in the same world featured in the previous Arkham games however it’s set several years before the events of Arkham Asylum with Batman still building his crime fighting reputation. So it will also be set before the rise of some of Batman’s most notorious villains. And even though there have been many stories dealing with Batman’s early years, WB states that this game “introduces an original prequel story line” and will take place in an expanded Gotham. So it’ll be even more massive than Arkham City, a new story line and also retain most of the aesthetics of the first two games since there’s a new developer.

If you haven’t heard, Rocksteady won’t be developing Batman: Arkham Origins and I had reservations about that because Arkham City was one of my favorite games let alone the best game based on a very popular superhero and I didn’t want the series to take a step back. However after reading the synopsis of the story for this game and some new game play aspects I’m very excited for this one. Since it’s Batman in his early years he’s viewed suspiciously by the Gotham City Police Department and doesn’t have the relationship with the commissioner that is so well-known in the Batman mythos.  And Batman becomes the target of Black Mask who puts a bounty on his head on Christmas Eve no less and as a result that attracts some of the more dangerous supervillains who Batman will encounter for the first time. There’s so much potential here for an excellent game and the new developer, WB Montreal, is seeking to take advantage of all of it. Since Batman’s status as a hero is up in the air as far as Gotham is concerned, in addition to thugs and supervillains, Batman will also have to contend with corrupt cops. So the mystery here is why has Black Mask put a huge bounty on Batman’s head?

To give an idea of how huge Arkham Origins will be, the setting for Arkham City is known as Old Gotham and is just a part of the world in this game. WB Montreal compensates for this by introducing the Batwing i.e. fast travel that can be summoned in locations where it’s safe so Batman can travel the city faster. Combat has been described as very similar to Arkham City and in the exclusive interview in the latest Game Informer issue, senior producer Ben Mattes describes it as “if it’s not broken, don’t fix it.”  I’m sure there will be some kind of tweaks that will take into consideration the gadgets in this game, which will include the Remote Claw that grab multiple enemies or objects. There will be puzzles to solve, investigations of crimes that have already taken place to unlock clues and for the first time Batman will be able to participate in stopping current crimes taking place. These will be known as “Crime in Progress” points and Batman will be able to rescue citizens or cops or stop some other type of crime and this will have an impact on Batman’s standing with the GCPD. So since the world this game is set in is much bigger there will be plenty of optional missions to participate in so the city doesn’t feel empty and is just pretty to look at. I’m VERY interested in seeing the crimes in progress and the other new elements added.

Naturally I will be keeping my eye on future news about this game since I’m a big Batman fan and this series.  It’s set to be released on October 25, 2013.