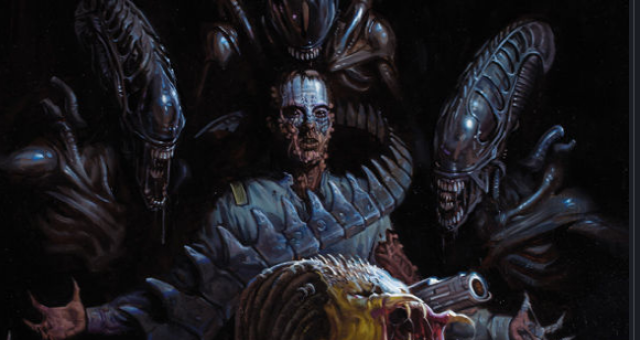 With their Fire and Stone series kicking off this past week with the release of Prometheus, Dark Horse has released a preview for Aliens Vs. Predator: Fire And Stone #1. It’s part of the Prometheus crossover event so it’s set after the horrible events of LV-223 but the crew of the Perses soon find themselves caught in the middle of a hunt between a deadly new predator and prey. We’ve seen many instances of Predators hunting Aliens but this one can be very intriguing in the context of this story line. And I’ve always been a fan of the Predators, even if their portrayals at times in different media have varied greatly. Yet with this series written by Chris Sebela, who currently writes Ghost, which I enjoy very much, I have high hopes for this series being entertaining. And coupled with the artwork of Ariel Olivetti, this should be one of the more interesting series in the Prometheus event. Check out the preview pages below. And afterwards, read the review of Prometheus: Fire and Stone #1 by Dave Gogel, who will be reviewing all the issues in the Fire and Stone event on this site. It’s set to be released October 8th, 2014.